Well, there you have it. With all the up roar over the last six days on social media Pinrose has bowed to public pressure and is pulling the “Starter Witch Kit” from production.

While some folks seem to be disappointed with the prospect I’m positive others will rejoice. This was a split issue within the Magickal/Witchcraft community but it was no where near 50/50 and the majority had their fairy glitter wishes granted.

As found on the Pinrose website in a quiet corner, not quite a press release, but instead marked as a “note”.

First and foremost, to those who have shared their disappointment or taken offense to this product, we apologize profoundly. This was not our intent. We thank you for communicating with us and expressing your feelings. We hear you; we will not be manufacturing or making this product available for sale.

Our intention for the product was to create something that celebrates wellness, personal ceremony, and intention setting with a focus on using fragrance as a beauty ritual.

– Artwork used in the kit was purchased by Pinrose on June 24, 2018. The Print Usage License (P-EL) covers use on products for resale and never expires.

– Per the USDA’s Natural Resources Conservation Service, Salvia Apiana (White Sage) is not classified as threatened or endangered. The sage that was planned to be used in this kit is sourced from a Green America Gold Certified company. The sage is grown in the wild in California and is sustainably harvested and sold by Native American owned and operated businesses.

– The product did not reference ceremonial smudging or ceremony circles.

About Pinrose:
Pinrose is based in San Francisco. The company is majority owned by its 8 full-time female employees. All Pinrose products are made in New Jersey, California, or Texas. Pinrose is an inclusive, luxury beauty company that amplifies your imagination and individuality because it inspires playful product experience, demystifies the world of fragrance, and tailors your buying journey. Our brand values include playfulness, inclusivity, individuality and making our customer “the face of our brand.” We do not use celebrity or designer endorsements as we encourage our customer to be the best version of themself.

With a statement like that I’m sure there will be plenty of “woe is them” and “Witches are meanies” to go around, that is, if the reviews on Pinrose’s Facebook page are any indication at the ire many Witches threw their way. 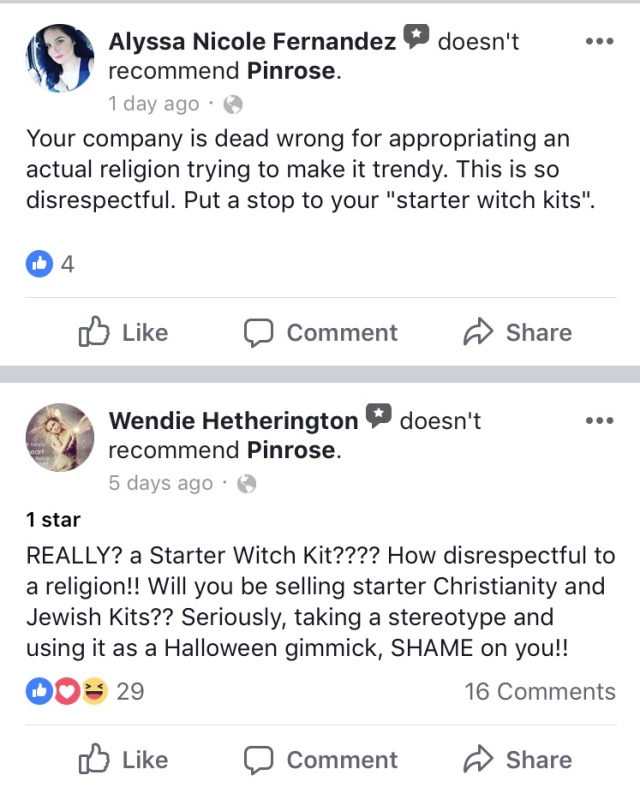 However, with a company so profitable that they are able to partner with Sephora its highly doubtful that this statement wasn’t manufactured by a PR firm creating damage control. To believe otherwise is simply naive. The cry me a river spin on this will be amazing for them especially when Witches will be fighting amongst themselves.

There is much information missing from this little note from Pinrose, like, was the whole Samiramay Tarot deck copied? We only saw the outer package and if they are claiming that image was properly licensed (no actual proof just their word for it) does that mean all of the images were? If an entire tarot deck had been granted distribution rights one would think that the original artist would be aware of it. (Update: 2:35AM, The original artist has updated her public statement to say the Sephora has finally been in contact with her and the licensing appears to be in order but only for the image seen on the deck cover, no idea what art was used for the entire deck) Plus, it is highly in doubt that Pinrose bought the rights to use and manufacture Prince’s symbol. Which is what I suspect is the main reason they pulled the product.

Another question not answered, was there an educational booklet included in the kit? In their note Pinrose mentioned that “the product” did not reference ceremonial smudging or ceremony circles. So what exactly did it say?

However, the absolute kicker for me was the line that Pinrose “inspires a playful product experience”. Really now? Didn’t you just apologize for insulting minority Religions/Spiritualities? Words have power ladies and you just admitted that you didn’t take commercializing Witchcraft as a big deal or using a Sacred Medicine for fun. I guess you got that wrong. Just like you got the entirety of the kit wrong.

I’ll be one of those Witches who celebrates the demise of the Pinrose “Starter Witch Kit”. To be honest, I didn’t think it would happen but Witches and Indigenous People who were outraged received satisfaction, for once.

Let this be a lesson for non-witch businesses out there, don’t commercialize Witchcraft, there are more of us than you think and we won’t be made your entertainment any longer.